Cañadón Pinturas Portal is the ideal destination for hiking and wildlife watching. The refuge «La Posta de Los Toldos», located within this Portal, just 4 km from National Route 40, offers accommodation in a warm and cozy atmosphere, with a restaurant, wood stove and campfire, camping and motor home areas.

The «Auek Yenú» restaurant, a local gastronomic undertaking, offers an extensive tour through the flavors of Patagonian food, either to enjoy on site or to take on day trips.

Free nature tourism activities are organized from the refuge, such as hiking, talks, stargazing and wildlife sighting outings. 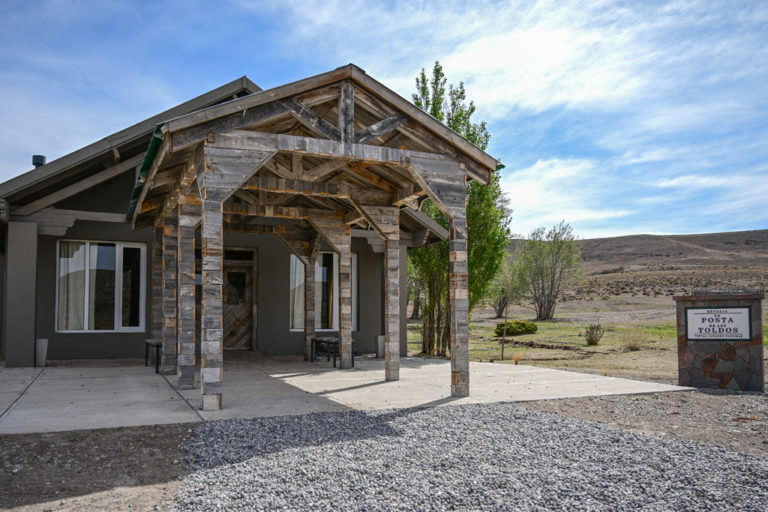 (*) Rooms can be used from Single up to the maximum detailed capacity.

How to get there: The access is located on RN 40, 74 km to the north of Parador Bajo Caracoles, and 54 km to the south of Perito Moreno town. The shelter is 4 km to the west (gravel road) of the very same national route.

At the Shelter there is NO possibility of refueling.  NO cell phone signal in the area. NO phone for guests. ASK FOR INFORMATION about Passenger Transport Companies that stops on National Route 40.

Recommended Activities: The information detailed, and its corresponding update, is Accommodation responsibility.

A winding trail leads through rainbow hills with incredible colors to a viewpoint that offers a 360 ° view that allows you to contemplate the Sumich Plateau, the Buenos Aires Lake Plateau, National Route 40 and, if the visibility allows it, the spectacular Cerro San Lorenzo.

The trail starts following an ancient animal footprint. A slight climb leads the hikers to the northern end of the Sumich plateau at 978 meters above sea level, where a beautiful landscape invites you to enjoy a 360° view of Buenos Aires Lake Plateau. Halfway, a hidden lagoon with a variety of birds surprises visitors.

This trail invites you to feel the immensity of Patagonia. At the beginning of the trail, on the walls of the canyon, you can see one of the endemic species in the region, the mountain viscacha. The trek offers striking views of the Cañadón Río Pinturas and the cliff of the Cueva de las Manos, the Cañadón Caracoles and a wide horizon to the south surprise hikers while enjoying the spectacular flight of the condors.

Bajada de Los Toldos Trek and rims
Cañadón rims: a brief and spectacular low-difficulty excursion connects the La Guanaca trail with the Bajada de Los Toldos trail. Los Toldos descent: this path descends from the rim all the way down the Cañadón del Río Pinturas, and allows the hikers to see the Cueva de las Manos from the front. The trails leads them to cross the river thanks to a metal footbridge, and ascend to the Cueva de las Manos visitors’ center, the starting point of the archaeological site tour. Distance: 2.6 km (round trip). Estimated crossing time: 45 minutes. Difficulty: Medium.
Wildlife sighting

Bird sighting and wildlife sighting is one of the exciting experiences that Patagonia Park offers.

Its pristine landscapes, habitat for the incredible and varied fauna of the region, are the stage where nature unfolds in all its splendor.

While walking through the wide network of trails of the Portal Cañadón Pinturas, you will be able to experience the sightings of the most emblematic species of the region: guanacos, rheas, foxes, skunks, condors, mountain viscacha, birds and even some elusive cougar, among others.

Cueva de las Manos is located within the Cañadon Pinturas Portal. This extraordinary archaeological site was designated a World Heritage Site by UNESCO in 1999. The cave, located on a cliff in the heart of the Cañadón del Río Pinturas, shows rock-art painted by hunter-gatherers over nine thousand years ago.

It is possible to hike to the site by the Bajada Los Toldos trail, a magnificent and varied path that takes you to cross the visitor center after crossing the breathtaking canyon.